This post is from 2012. I was really excited as you will see. This interaction with Yukimura Haruki really had an impact on us and our Kinbaku. It lead to us planning a trip to Japan to study with him further. Sadly Yukimura Sensei passed away not long after as we learned the week before we were scheduled to see him in Japan. We decided to go anyway and we had an amazing time in Tokyo, more of that in another post. This is a brief account of that first meeting though.

Part One – The excitement

This week we shall (thanks to clover) be going to study with Yukimura Haruki.

What a really good learning experience does is open your mind to new possibilites, possibilities you hadn’t suspected before. Further it gives you a way into those new experiences.

One thing that I think is worth emphasising is the tremendous contribution that the interpreters made to this class. In a large part due to the fact that not only were they there because they spoke excellent Japanese but also they were students of Yukimura Sensei and therefore understood what they were translating and could also spot the mistakes that we made during the day. They were very much part of making the day what it was. 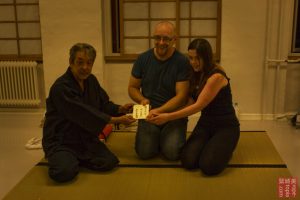 The grand master is also known for his calligraphy skills and it was a great surprise to receive this calligraphied board on the day.

Through watching videos of the grand master tying I had some idea of what Yukimura Sensei was about but learning from him showed how easy it is to fail to understand what someone is really doing from just watching. I had thought that a large part of what he was doing was not so to speak ‘in the visible range‘ and that proved to be the case. I shall certainly be re-viewing his videos with new eyes now.

This might be disappointing to some readers but one thing I’m not going to do in this blog or anywhere else is describe Yukinura Sensei’s techniques or the content of the lessons. This is his information and method to teach as he chooses and to publish at his discretion. I think that just like the first time I met Osada Steve Sensei the repercussions of this day’s learning will spread through all my tying and also that it will take a long time for the full consequence and implications of these lessons to be fully recognised.

Yukimura Sensei seems to have quite a definite on screen persona (I want to qualify that by pointing out that I have definitely not seen everything he’s done by a very long way) This is not the case of the man in person. It’s quite fascinating to see him turn it on when tying. There’s certainly no denying the effectiveness of his techniques. One thing that really struck us was that great emphasis was placed on the both safety and the role of the bottom in a scene. Bottoms were not expected to simply be passive objects to be tied, far from it.

So finally I am very happy to have had this opportunity to learn. This is the first time the grand master has taught outside of Japan. I for one am very happy he did. If even only for one day it was wonderful to have this chance to learn.

Note on language: I don’t speak very much Japanese and generally don’t gratuitously use Japanese titles, terms etc. unless I know for certain what they mean and mostly if there isn’t an appropriate English alternative.

Part Three – Done but not finished

This is the final blog on this experience. All that’s left is a few words about the dojo anniversary party on Saturday night.
The Copenhagen shibari dojo is two years old. Our congratulations go to its founders and members.

The night was marked by two performances by members of the dojo and by a tying demonstration by Yukimura Hariki Sensei which used all the techniques taught during the teaching days in the week. A little while later the grand master tied again, and I’m sure that there was not meant to be any kind of show element, however there was an audience.

As the evening progressed a number of people moved onto other events nearby. We however were happy to stay at the dojo and enjoyed the company and some tying of our own.

A final treat of the evening was that grand master Yukimura tied again another two times utilising techniques and ties that were not in the lessons. Having the opportunity to observe these sessions was an education in itself. A great end to a wonderful experience.
We were to leave Copenhagen with nothing but good memories of our time there. Of wonderful people and wonderful lessons learned.
The last mention here must go to clover without whom this trip would not happen. As birthday presents go, this one was something special.