This was the second London festival but our first and it was an amazing experience. It was also our first encounter with Hajime Kinoko but not our last.
The home of the London festival is the Resistance gallery in Bethnal Green. This converted railway arch has a great combination of space and intimacy and really worked well for this event.
There were many highlights to this event, one of the first was a master class with Kinoko which was very informative. The second was the nights performances.
There were performers from all over Europe and I think that I can best describe the quality of them as ‘variable’. Generally they got better as the night wore on. The real star of the show was without a doubt  Hajime Kinoko. His stage show really showed people what could be accomplished on stage and I think that his performance was a wake up call for many riggers who thought that they were pretty good already.
The atmosphere all through the event was incredible and it was a real pleasure to make new friends from all through the rope loving world.
I have many memories from this festival of things and conversations and wonderful things said; many of which I am not going to share here.  I will say that some people are very kind and that I very much appreciate their words.
Clover had a highlight herself, she was tied and suspended by Hajime Kinoko. (yes we have photographic proof). 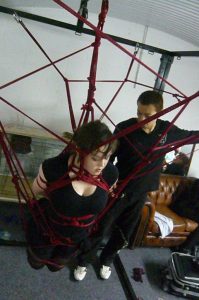