BED (Bondage Expo Dallas) is a special event for us.

We’ve been involved with BED right from the very beginning and have been a part of it every year since. We count the BED organisers as friends and their hospitality has lead to us having the feeling of coming home when we head to BED. I know I say that every year but we feel that every year. If there’s one thing I’d change I’d like to have more time to hang out after the event than we had this year. Sadly vacation time is limited and we had to leave the day after the event. Much tears and sad goodbyes.

We were met at the airport by TwistedCupcake and taken straight to the hotel. Due to our flight times it was the first time we hadn’t stayed with Dallas Kink and Cat Nawashi before the conference, it felt weird not to be going out to Cedars first. When we arrived at the hotel people were already arriving for the BED and we immediately saw some familiar faces. After getting checked in and unpacking our gear I hung out in the lobby for a while catching up with a few people.
Thursday evenings main attraction is the FOREplay part at The Nines in Deep Ellum. There were performances by Parker RopeBoi who did self suspension. Olivia Lyon & LOON whom I remember actually fell off the stage, and a kind of muses of kinbaku themed performance by Kissmedeadlydoll, Fuoco & Mildred S. Pierce. There was also a lot of tying on the roof once BED’s heroic staff members had brought and set up some portable suspension frames. There was also plenty of socialising and enjoying the Texas night air. We didn’t stay too late as we wanted to get a good night’s sleep and our body clocks reset to Texas time.

Our first class of the convention was ‘Reciprocity’ which went over very well. It’s a new class we’ve been developing and it was really good to have it well received.
Friday is also performance night. I was worried about performing due to back problems, I’d been in hospital the day before we travelled to Dallas and was only really functioning due to a combination of strong meds. However once we started it was OK and we made it through without any problems. Also we had no idea at the time that pictures were being take of the show which was an amazing bonus for us. It is always wonderful to have pictures to bring back memories of our feelings during a show as we tend to live them in the moment and not remember much other than the feeling afterwards. This was a good feeling and we felt very close after the show. Clover as always was beautiful in bondage. 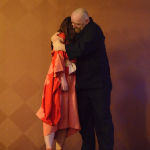 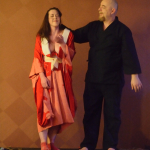 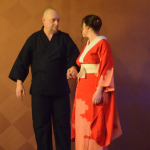 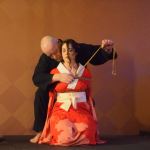 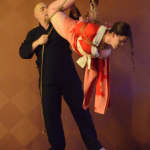 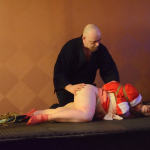 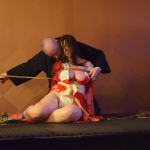 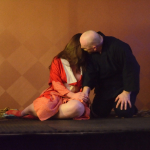 Saturday brought two classes. ‘Dynamic transitions’ featuring the ‘WykD Roll’ as Pedro calls it and ‘Tying with Bamboo’ which I should probably really call ‘Tying on Bamboo’. I have to thank GMT and OjiPan for being TAs in both classes and demonstration people in the Dynamic Transitions class. It was nice to see people execute a good dynamic transition and to see the bottoms response to the experience. In Tying on Bamboo we presented practical techniques, aesthetics and did a demonstration in which we got a bit personal and into it which I think was a good thing for the point of the class, yes here’s the technique but here’s what it’s for!

One last class on Sunday and it was a repeat of Reciprocity which had been scheduled twice due to the number of requests from convention goers for this class which was very gratifying and says something about the attendees given that they gave so much attention to this subject. Thanks to everyone who wanted this class and thank you again for the amazing feedback you gave to us afterwards, we were really touched.
The closing ceremonies closes out the doings at the conference hotel but aren’t the end of the con for us as Sunday also features the after party show at The Church in Dallas. We were very sad to be unable to perform there, this is the first show we’ve ever had to pull and the only time we haven’t done this show in the history of this con. It gave us a real feeling of sadness and we are very sorry and if we could have done it we definitely would!

After the shows were done. We were late to the party but in time to see Saki Kamijoo’s show which was very entertaining, and just as a side note Saki San is a bit of a meanie to her bottoms with that whip!

We were a bit emotional when we were all hugging it out and getting pics together in the dressing room as this was the end of the con proper for us all though we also went on to the after-afterparty at Dallas Kink’s place. Mainly we went to hang out a little bit more and spend squeeze the last moments from this day before heading back to the hotel. 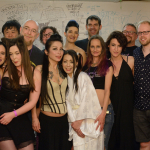 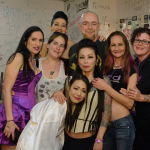 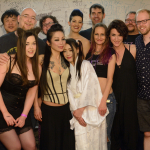 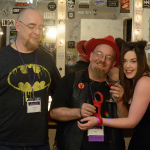 We were so happy to have a late flight on Monday, it meant we could hang out with our friends and have some fun together at least for a little longer before we had to head home.

So we started the day very pleasantly with breakfast at a great place close to the hotel where an insanely good breakfast may be had in pleasant surroundings and we were joined by TwistedCupcake whom you may remember collected us from the airport and MadameLush who is a BED worker but is mainly visible as the boot wearing and latex clad hostess of the afterparty at The Church. A very good start to the day. We followed this by meeting up with many of the other organisers of BED and having a fun and relaxing time together (I won’t say where) but yes, very relaxing. And then yet more sadness as we have to say goodbye for the last time to most of them for another year.

MadameLush and TwistedCupcake drove us to the airport for our flight home. One last sad farewell and it’s time to leave.

Arriving home in Britain and it’s apparent we’re going to drop hard after the high of the conference which was so hard on the heels of BeachBind less than two weeks before.

We miss all our friends in Dallas. It will be too long before we see you again.